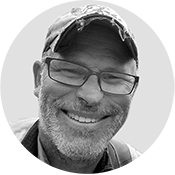 With more than 35 years in the mineral exploration sector, C.J. (Charlie) Greig is among the most experienced geologists in B.C., particularly in the geologically fertile northwest of the province. He currently serves as VP Exploration of GT Gold Corp. where, since the Company’s establishment in fall 2016, he has led the exploration team that delivered and is now advancing the very large scale “Saddle” Au-Ag-Cu discovery, the most important new discovery in the northern part of B.C.’s rich Golden Triangle since that of the nearby Red Chris deposit in the 1990s. He presently also serves as President of C.J. Greig & Associates Ltd., which provides geological consulting services throughout British Columbia, and sometimes further afield. Past projects in the Golden Triangle include work on Brucejack Lake (Pretivm), Red Mountain (Lac Minerals, IDM), Silbak Premier (Westmin, Ascot), and IKE (HDI-Amarc), and abroad on such projects as La India in Mexico (Grayd, Agnico Eagle) and Bisha in Eritrea (Nevsun).